OK, so yes, I’ve gone and spent money I probably shouldn’t have. Approximately $96.

That said, I’ve spent significantly less money than I would’ve if I’d headed in the soldering direction (which I’m not really set up to do right now, anyway, and would’ve run me over $200 to start up even SORT OF properly), and THIS project gives nearly instant gratification (as last night’s efforts show). So I’m not sorry, not one little bit.

I’ve just purchased 5 sheets of 6” x 12” pieces of sheet metal, in interesting (but fairly inexpensive) varieties, some pre-textured (because currently, it’s cheaper to buy textured metal than to buy hammers to texture it. I have precisely one chasing hammer, which is flat on one side and ball pein on the other; I used the ball pein, yesterday. If I have any success with this stuff… and I think I will… the sale of the textured metal pieces will pay for the textured hammers) , some not, and a whole heck of a lot of alcohol inks, because someone on Etsy was selling, like, 6 packs of them for $30 (they retail at $10/pack. I know. I looked, yesterday).

I don’t have metal shears yet, so I’m going to be stuck making circles around the edges of the sheets for a while with the punch & die set purchased at Harbor Freight at the same time I got the dapping set. But there’s nothing wrong with circles. And I can always purchase copper shapes at Rio if I want to branch out in a different direction before I get to the shears. Files will be purchased from Harbor Freight at a very reasonable price. And then… we’re pretty golden! Or… y’know, coppery and brassy! With pretty colors and sparkly dangly things! I can re-open my shop, and have actual EARRING JACKETS to sell (y’know, those things I promised from day one, and in fact have only actually marketed two varieties of?)! There’s surprisingly few people out there doing alcohol ink jewelry (only 13 pages on Etsy, and most of it is resin or glass), so… yeah! Cool!

It’s been a while since I was truly excited about something (at least, since my original kiln went kerflooey, and I discovered that torch-firing enamel was going to be a bigger problem than expected). It’s a nice feeling. And I can do this NOW, and quickly, and it’s PRETTY, and I can embellish it with the gazillions of beads I’ve already got in stock. 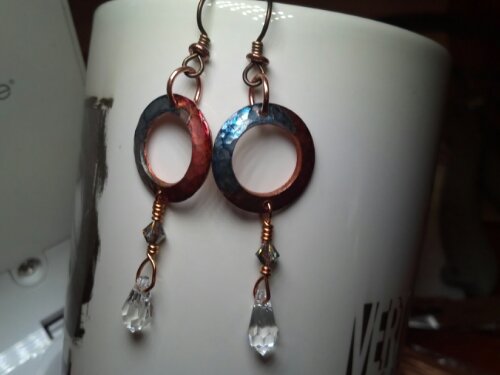 So! That happened.
Pretty pleased with them, on the whole. I mean, the inking is definitely rough, but… yeah, not bad for a first try. Not bad at all.
I’ll wear ’em to work tomorrow & see what, if any, reaction they get. 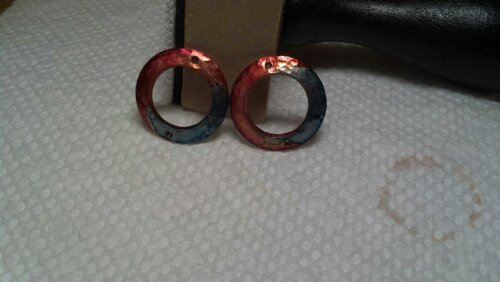 Hey, look! I did something! Hammered, domed, inked (only on one side, though, so these’ll be mine). It’s my first alcohol ink attempt; I imagine I’ll get better at it. Hope so, anyway. Still – not bad, for a first try, right? The first coat of sealer is drying. There’ll be a second coat, then more drying. And eventually, earring hooks and sparkly things, through the holes I punched my very own self. 🙂 *squee!*

It’s been a good long while since I’ve been bitten by the MUST MAKE STUFF NOW bug. Even now, I feel the urge may leave me when I get home, for the simple reason that my apartment is too cluttered to find a clear spot to work on. But… such predicaments, we must forge ahead – I’ll clean something off. At least a corner of something, anyway. Because tonight… we DAP! Dapp? We take bits of metal and HIT THEM WITH HAMMERS!!! YAAAAAAY!!!

I was preparing for an uncharacteristic attempt to go to bed early last night, and passed by my stainless steel table with casters, which was originally purchased to hold my wee little kiln. Kiln got shipped back for replacement, and table became, as expected, a catch-all for crap. On the up-side, it’s all jewelry-related crap. On the downside, it’s still just a pile of crap. I now have a new kiln, but it’s still boxed up, and likely to stay that way for the time being.

Sticking out from the pile of crap was a package of copper washers, purchased at Harbor Freight on April 4th.

And even though I’ve passed them a gazillion times since then, this time, they caught my eye. And my brain said, “Wow. I’ve had those for over a month, and haven’t done a darned thing with them.”

Well, that’s because I couldn’t enamel them. I didn’t have a kiln, and torch firing them seemed impossible to do, at least in this location. So what else was there to do with them? I could’ve used the dapping tools I bought at the same time and domed them, I suppose, but then what?

Then came the, “Ooh, shiny,” lightning bolt to the head:

Now, I didn’t have any intention of dapping or inking anything last night; it was already almost 9:30, and even the ADD part of my brain knew better than that. But I also knew full well that the dapping set was covered in lubricating oil; how much time could it take to get that off, really?

The answer: about an hour or so, via Kirkland Signature Household Surface Wipes, Orange Scrubbing (smooth side).

So, there I was, at 10pm last night, happily standing in my kitchen and rubbing away disgusting quantities of what appears to have been motor oil, and installing it in its little storage block.

So now, I’m at the job that actually, y’know, pays me. And all I can think of is stopping at Michael’s on the way home to pick up a varnish to seal them, and then… POW!

I’m also currently a bit obsessed with soldering. Which is interesting, since technically I didn’t do very much.

Had a class, weekend before last. Was supposed to learn soldering. And I did, a little teeny bit; I soldered bezel wire. I fried the first one; the second one took the join. But I didn’t get to finish the piece (solder it to the rest of the piece), and I didn’t get to rivet anything, and since a) we used my torch in the class, and b) people were still at it when I had to go, I left my torch behind, there’s very little point in my being obsessed with soldering. That has not, however, prevented me from assembling carts at several different stores such as Rio Grande, Amazon.com and Harbor Freight, of tools to help me further my obsession with soldering. I already ordered the adjustable chuck and teensy drills for my Dremel on eBay… which I can’t use until I complete my Rio order, because that’s got the bur/saw lubricant in it. By careful picking and choosing, I’ve got that cart down to about $122. Harbor Freight is $44. Amazon is $36. So that’s about $200 I don’t really have, for something I don’t feel comfortable doing in the place I currently live.

I must exercise patience.

…I SUCK AT PATIENCE.

If I had my torch, I could at least rivet things (it starts with balling headpins). Actually, I suppose, if you want to get technical, I could use already balled or flattened headpins, and do it that way.

Thing is, even when I have my very own home, there will be obstacles to me doing this sort of thing, not least of which being that I’ll be paying for it (which means I very DEFINITELY won’t have $200 to spend on this stuff).

I’ll figure it out. One way or another, I will do all sort of nifty things with fire and heat.

But that will not happen today.

Today… I beat things with hammers.

And I may then turn them mottled pretty colors.

I may even wrap them with wire and dangle sparkly things from them.

Pardon my cruddy kitchen photography.
Today’s adventures in PearlEx ombre didn’t turn out quite the way I expected. This is white epoxy clay covered with a copper powder. Right now, it looks pretty great, but I’m not sure how much of the powder it’ll hold on to.

Here, I DID do a little more of an ombre effect; I used three different colors of powder (green, blue, interference blue). But what’s interesting is, it’s really difficult to see it. If you look at it dead on, it’s just got a hint of blue. I expected the interference blue to be something you only saw from an angle, but the green should have been… well, green!

A Sparkly of Your Very Own is on Facebook!

A Sparkly of Your Very Own is on Facebook!